Not a ranger, a gardener of love

The "Ranger Me" Challenge never grabbed me, and I couldn't quite figure out why. I could have just moved on and payed attention to something else, but something made me want to figure out what was bothering me. Then I realized, it's putting myself in a uniform.

I knew from about 11 or 12 years old that I was subject to the draft, and that I was not going to register or serve in the military. I am a lifelong pacifist, out of political conviction, not religious, although Khalil Gibran was a kind of mystical inspiration. I began assembling my dossier to establish that I was a Conscientious Objector to War by the time I was 13.

So putting myself in a ranger uniform just didn't work. It's also uncomfortable in that many Park Rangers are armed and sworn police, with the capacity to use deadly force. I cannot imagine being in a position to use deadly force. I have never struck another human being, or held a weapon since pre-teen archery practice.

I decided to try to research a bit the historical rangers, and the mythical rangers, Aragorn/Strider from Tolkien, but still pretty militaristic. There was a Norwegian archer who was a conceivable model, but she's pretty fierce, too.

So really my alter ego as a Steward of the Earth, a Protector of Parks and Wildlands, is the Gardener of Love I was back in the 70's: 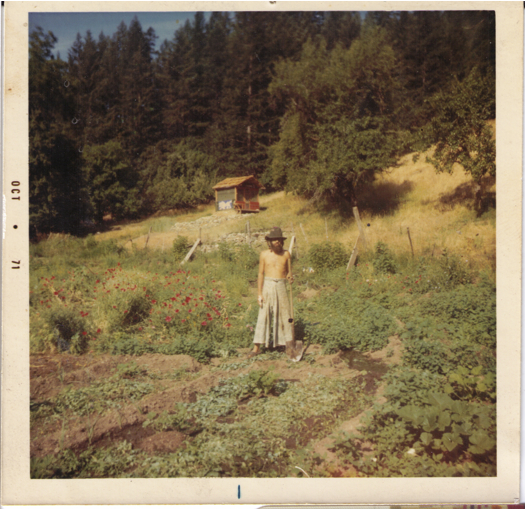 That's the communal outhouse on the hillside behind me, and hillside above that outhouse is the one that we terraced for a vineyard, which I wrote about in "Markings on Her Face."
Posted by Fred Mindlin at 10:50 PM